Meadowlark Optics’ Liquid Crystal Variable Attenuator (LCVA) offers real-time, continuous control of light intensity. Our attenuator consists of an LC Variable Retarder (with attached compensator) operating between crossed linear polarizers. With crossed polarizers, light transmission is maximized by applying the correct voltage to achieve half-wave retardance from the LC cell as shown in figure 4-11. Half-wave operation rotates the incoming polarization direction by 90°, so that light is passed by the second polarizer. Minimum transmission is obtained with the retarder operating at zero (or a whole number of) waves.

Transmission decreases as the applied AC voltage amplitude increases (half- to zero-waves retardance). The relationship between transmittance T and retardance ?(in degrees) for crossed polarizer configuration is given by: T(Θ) = 1/2 [1 – cos(Θ)] Tmax whereTmax is the maximum transmittance when retardance is exactly one-half wave (or 180°). Figure 4-12 shows transmittance as a function of applied voltage.

Maximum transmission is dependent upon properties of the LC Variable Retarder as well as the polarizers used in your system. Figure 4-13 shows the transmission of an LC Variable Attenuator optimized for use at 550 nm with crossed polarizers. An unpolarized light source is used for illumination.

A Liquid Crystal Variable Attenuator can be configured with high efficiency calcite or beamsplitting polarizers to maximize light transmittance and increase damage threshold. With a linearly polarized input beam and a calcite polarizer, transmittance values exceed 90% at most wavelengths. Very high extinction ratios, in excess of 5000:1, can be achieved with custom double attenuators. In this design, two Liquid Crystal Variable Retarders are combined with three polarizers.

Use the arrow icon –

request a quote or get technical questions answered

Sculpted Light in the Brain

Cambridge, MA. From sculptedlight.org: Sculpted Light in the Brain is a recurring conference (founded in 2017) aimed at fostering collaborations between neuroscientists, computer scientists, optics researchers, and other scientists who share the common interest of using and developing novel technologies to observe and control neural activity in the awake, behaving brain. “Sculpted Light” refers to a broad class of methods where light is shaped to probe neural function. This meeting aims to promote future collaboration opportunities by gathering established scientists and the next generation of researchers from these fields to discuss future technologies that will enable real-time optical communication with the living brain. 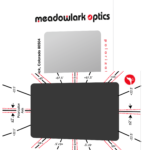